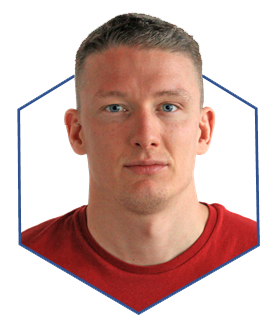 He comes from Příbram from a hockey family, he has been playing hockey since he was a child. He played hockey in several clubs in the Czech Republic. At the age of 15, he added martial arts to his fitness training. The offer for the first professional MMA match did not take long. To date, he has a total of 13 of them with a balance of 7 wins. He spent the last two preparations for the winning matches alongside UFC wrestlers in the most professional martial arts center in Prague. He has been training tennis players and hockey players for 5 years, mainly in Prague. His experience includes strength and conditioning training, boxing and MMA training, physio trainings, movement diagnostics, correction of poor posture, elimination of bad movement habits and stabilization of the spine. In private, he enjoys traveling, adrenaline sports and motorcycles, and likes to exceed his limits. He strives for progress in himself and others.

In HDC CR, in addition to organizing and leading a team of coaches, he is in charge of short-, medium- and long-term training plans and comprehensive player development. He specializes in fitness training, corrective exercises and rehabilitation. David is also involved in sports nutrition.